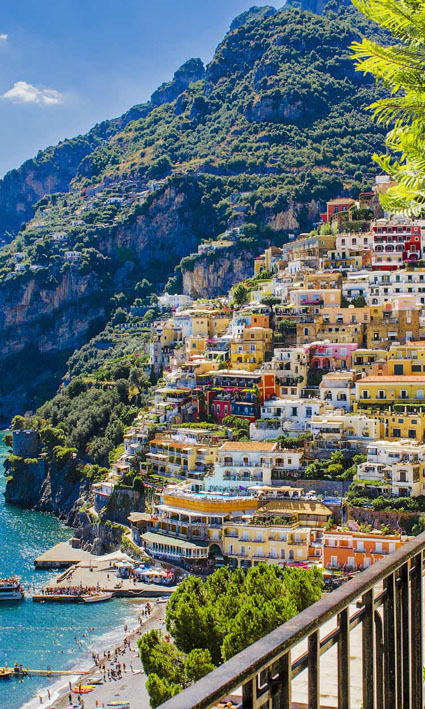 Costiera Amalfitana
Known as the Pearl of the Amalfi Coast, Positano charms millions of tourists every year with its amazing views. The houses cascading down the hillside, the tiny streets, the buildings' grand entrances, the many steps and the wonderful beach make this an unmissable place.
Following the windy road, passing through many small communities, we arrive in Amalfi. The oldest of the Italian Marine Towns is rich in medieval architecture and has evidence of some precious art work such as the Cathedral and the Cloisters of Paradise.
Also not to be missed are the breathtaking views from Ravello, looking over Maiori and Minori. An enchanted town where the sumptuous villas and gardens have inspired many famous people such as Giovanni Boccaccio, Richard Wagner and Gore Vidal.

Sorrento
Sorrento is a small city in Campania, Italy, with some 16,500 inhabitants. It is a popular tourist destination. The town can be reached easily from Naples and Pompeii, as it lies at the south-eastern end of the Circumvesuviana rail line. The town overlooks the bay of Naples, as the key place of the Sorrentine Peninsula, and many viewpoints in the city allow sight of Naples itself (visible across the bay), Vesuvius and the island of Capri.

Venice (Italian: Venezia, Venetian: Venezsia, Latin: Venetia) is a city in northern Italy, the capital of region Veneto, and has a population of 271,251 (census estimate January 1, 2004). Together with Padua, the city is included in the Padua-Venice Metropolitan Area (population 1,600,000). Venice has been known as the "Queen of the Adriatic", "City of Water", "City of Bridges", and "The City of Light". The Venetian Republic was a major maritime power and a staging area for the Fourth Crusade, as well as a very important center of commerce (especially silk, grain and spice trade) and art in the Renaissance and up to the end of the 17th century. Venice, regarded by many as "the most romantic city" is the most touristed city in the world, with an estimated 15 million foreigners visiting in 2005.
Location
The city stretches across 117 small islands in the marshy Venetian Lagoon along the Adriatic Sea in northeast Italy. The saltwater lagoon stretches along the shoreline between the mouths of the Po (south) and the Piave (north) Rivers. The population estimate of 272,000 inhabitants includes the population of the whole Comune of Venezia; around 62,000 in the historic city of Venice (Centro storico); 176,000 in Terraferma (the Mainland), mostly in the large frazione of Mestre and Marghera; and 31,000 live on other islands in the lagoon.

Florence (Italian: Firenze) is the capital city of the Italian region of Tuscany, Italy, and of the province of Florence. From 1865 to 1870 the city was also the capital of the Kingdom of Italy. Florence lies on the Arno River and has a population of around 400,000 people, plus a suburban population in excess of 200,000 persons (about 1,000,000 with the important near city Prato). A centre of medieval European trade and finance, the city is often considered the birthplace of the Italian Renaissance and was long ruled by the Medici family. Florence is also famous for its magnificent art and architecture. The city has been called the Athens of the Middle Ages. The "Historic Centre of Florence" was declared a World Heritage Site by the UNESCO in 1982.
Climate
Although usually perceived to have a Mediterranean climate, under the Koppen climate classification Florence is sometimes classified as having a Humid subtropical climate (Cfa). It experiences hot, humid summers with little rainfall and cool, damp winters. Due to the geographical position of the city (surrounded by hills in a valley traversed by the Arno river), Florence can be hot and humid from June to August. Summer temperatures are higher than those along coastlines, due to the lack of a prevailing wind. The small amount of rain which falls in the summer is convectional in type. Relief rainfall dominates in the winter, with occasional snow.

Rome (Italian: Roma) is the capital city of Italy and of the Lazio region, as well as the country's largest and most populous comune, with more than 2.7 million residents. The metropolitan area has a population of about 4 million. It is located in the central-western portion of the Italian peninsula, where the river Aniene joins the Tiber. The Mayor of Rome is Walter Veltroni.

An enclave of Rome is the State of the Vatican City, the sovereign territory of the Holy See. It is the smallest nation in the world, and the capital of the only religion to have representation in the United Nations (as a non-voting member state).

Rome, Caput mundi ("capital of the world"), la Città Eterna ("the Eternal City"), Limen Apostolorum ("threshold of the Apostles"), la città dei sette colli ("the city of the seven hills") or simply l'Urbe ("the City"), is thoroughly modern and cosmopolitan. As one of the few major European cities that escaped World War II relatively unscathed, central Rome remains essentially Renaissance and Baroque in character. The Historic Centre of Rome is listed by UNESCO as a World Heritage.

Location
Rome is in the Lazio region of Central Italy, at the confluence of the Aniene and Tiber (Italian: Tevere) rivers. Although the city center is about 24 kilometers inland from the Tyrrhenian Sea, the city territory extends to the very shore, where the south-western Ostia district is located. The altitude of Rome ranges from 13 meters above sea level (in Piazza del Popolo) to 120 meters above sea level (the peak of Monte Mario).[citation needed] The comune of Rome covers an overall area of about 1,285 square kilometers, including many green areas.
Climate
Rome enjoys a typical Mediterranean climate which characterizes the Mediterranean coasts of Italy. It is at its most comfortable from April through June, and from mid-September to October; in particular, the Roman ottobrate (ottobrata can roughly be translated as "beautiful October day") are famously known as sunny and warm days. By August, the temperature during the heat of the day often exceeds 32 °C (90 °F); traditionally, many businesses would close during August, and Romans would abandon the city for holiday resorts, but this trend is weakening, and the city is increasingly remaining fully functional during the whole summer, in response to growing tourism as well as change in the population's work habits. The average high temperature in December is about 14 °C (57 °F). 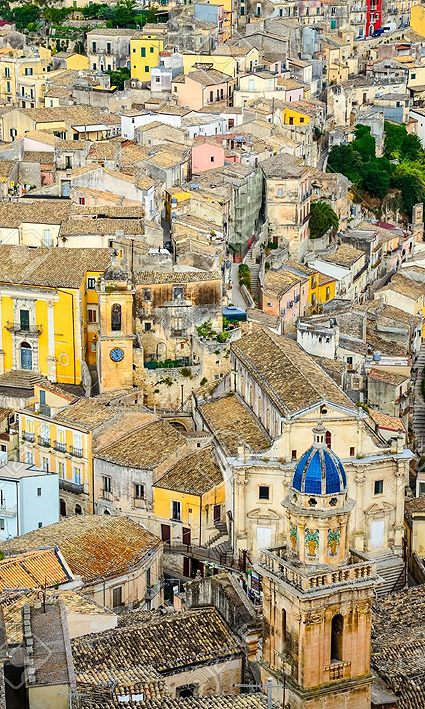 Sicily (Italian and Sicilian: Sicilia) is an autonomous region of Italy in Europe. Of all the regions of Italy, Sicily covers the largest surface area with 25,708 km² and currently five million inhabitants. It is also the largest island entity in the Mediterranean Sea, though several much smaller islands surrounding it are also considered part of Sicily. Throughout much of its history, Sicily has been considered a crucial strategic location due in large part to its importance for Mediterranean trade routes. The area was highly regarded as part of Magna Graecia, with Cicero describing Siracusa as the greatest and most beautiful city of all Ancient Greece. Although today it is a region, it was once a fully fledged country of its own as the Kingdom of Sicily, ruled from Palermo; this also incorporated parts of Southern Italy for some time and Malta. It later became a part of the Two Sicilies under the Bourbons, which was actually centered in Naples rather than Sicily. Since that time the risorgimento has occurred and Sicily has been a fully fledged part of Italy. Sicily is considered to be highly rich in its own unique culture, especially in regards to the arts, cuisine, architecture and even language. The Sicilian economy is largely based in agriculture (famously orange and lemon orchards), this same rural countryside has attracted significant tourism in the modern age as its natural beauty is highly regarded. Sicily also holds importance for archeological and ancient sites such as the Necropolis of Pantalica.

Geography
Sicily is directly adjacent to the Italian region of Calabria, via the Strait of Messina to the east. The early Roman name for Sicily was Trinacria, alluding to its triangular shape. Sicily has been noted for two millennia as a grain-producing territory. Citrons, oranges, lemons, olives, olive oil, almonds, and wine are among its other agricultural products. The mines of the Enna and Caltanissetta district became a leading sulfur-producing area in the 19th century but have declined since the 1950s. Administratively Sicily is divided into nine provinces; Agrigento, Caltanissetta, Catania, Enna, Messina, Palermo, Ragusa, Syracuse and Trapani. Also part of various Sicilian provinces are small surrounding islands, including the Aeolian Islands, the Aegadian Islands, Pantelleria, Ustica and the Pelagian Islands.